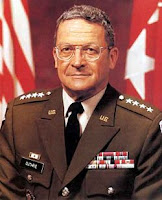 General John Reiley Guthrie (USA Ret.), died peacefully at Walter Reed Army Medical Center on Memorial Day, May 25, 2009, with his loving family at his bedside. He was 87.
Born in Phillipsburg, New Jersey, Gen. Guthrie graduated with honors in History from Princeton University in 1942, receiving his commission as a 2nd Lieutenant out of Princeton’s ROTC program, ultimately becoming the program's first four star general. Gen. Guthrie served in the War Department General Staff during World War II, after which he was stationed in London, England, where he met his wife of 58 years, Rebecca Jeffers Guthrie, who died on April 11, 2005. In June 1951, he was assigned to the 3rd Infantry Division Artillery in the Korean War. During this period, he participated in operations against guerrillas in the Wonson area, the evacuation from Hungnam, the reoccupation of Seoul, the spring Chinese offensive and United Nations counteroffensive.
Among his duties and accomplishments in his 39-year Army career, he was the Army Staff project officer for the launching of the United States' first artificial earth satellite, Explorer I, was Chief of Staff of the 25th Infantry Division, Assistant Commanding General of the 2nd Division, Commanding General of U.S. Army Japan, and finally, Commanding General of the U.S. Army Material Command (AMC), from which he retired in 1981. His command at AMC included a workforce of over 116,000, and was responsible for research and development, test and evaluation, procurement and production, storage and distribution, inventory management, maintenance and disposal of all Army materiel. In statements entered into the Congressional Record upon Gen. Guthrie’s retirement, James Courter wrote: “...under [Gen. Guthrie’s] leadership, [the Army’s] materiel development and supply functions have been significantly improved. His influence on Army aviation, armor, combat and transportation vehicles, communications, electronics, missiles and munitions – virtually every piece of equipment that supports the Army mission and the individual soldier – is most evident.” During his career he was decorated with the Distinguished Service Medal with 1 Oak Leaf Cluster, the Legion of Merit with 2 Oak Leaf Clusters, the Bronze Star Medal with 2 Oak Leaf Clusters, the Joint Service Command Medal, the Army Commendation Medal, Distinguished Service Award from Federally Employed Women, and the Minuteman Hall of Fame Award.
For all his accomplishments, it was his commitment to people that distinguished his service. Again, in the words of Congressman Courter: “Gen. Guthrie has not confined his attention and energy to the equipment which the Army needs. He has also worked unceasingly in behalf of civilian and military personnel quality of life programs. He has, for example, taken measures to assure the fair distribution of awards, recognition, and training opportunities and is recognized for his strong support of Federal upward mobility, equal employment opportunity and women’s programs.” When he was awarded the Distinguished Service Award from the Federally Employed Women, he was recognized, in the words of the FEW nomination, for “his intolerance with less than full commitment to EEO principles.”
In retirement, Gen. Guthrie served on a variety of boards of directors, including Princeton University, where he served as trustee from 1981 to 1985. He dedicated himself to serving Princeton and his Class of 1942. In 2000, he was recognized with the Harold H. Helm award, an award given annually to a single alumnus to recognize “exemplary and sustained service to Annual Giving.” In 2007, the Alumni and Friends of Princeton University ROTC established the General John R. Guthrie ’42 ROTC Scholarship Fund. Due to the outpouring of financial support for the fund, there were already seven recipients of Guthrie Fund support this year.

Gen. Guthrie and his wife Becky also served as trustees of St. John’s Community Services (SJCS), a human services agency that supports children and adults with intellectual, developmental and other disabilities, and he as the founding Chairman of the SJCS Foundation. In 2002, SJCS established the John R. and Rebecca J. Guthrie Endowment Fund to support the Guthrie Home, a SJSC residence for people with disabilities.
The life of Gen. Guthrie, --“Papa”, “DOD”, “Sir”, “the General” -- was a life of service -- to the nation, to his alma mater, and to his family. As a man, he was positively relentless, and relentlessly positive. Everything he cared about he pursued with unswerving and unbounded passion and a pure ambition and absolute determination to set a new standard. It was true of his love of country, the U.S. Army, Princeton, and of his beloved Redskins. His final years were lived at Greenspring Village, in Springfield, VA, where he made many new friends and brought his special fire to the Wii bowling league on campus, where he served as Secretary/Treasurer and where his Stoppers were champions and league leaders. Go Stoppers! Go Tigers! Go Skins!
“The General” is survived by his six children and their husbands and wives, Claire G. Gastañaga (Javier) of Richmond, VA, Michael R. Guthrie (Dottie) of Charlottesville, VA, John J. Guthrie (Marty) of Arlington, VA, Peter B. Guthrie of Princeton, NJ, Margaret G. Ressner (Dick) of Toledo, OH, and Kevin McC. Guthrie (Sari) of New York, NY, nine grandchildren, and an extended family far too numerous to count.
Gen. Guthrie will be buried at Arlington National Cemetery with full military honors on June 30, 2009 at 9am. Murphy Funeral Home in Arlington is handling the arrangements. The family asks that contributions, in lieu of flowers, be made either to the General John R. Guthrie ’42 ROTC Scholarship Fund at Princeton or the John R. and Rebecca J. Guthrie Endowment Fund at St. John’s Community Services.
Posted by Claire Gastanaga at 1:43 PM 8 comments: Links to this post